Firetower consists of one 100% owned tenement with gold and copper targets within approximately 12km of strike of prospective rocks throughout the area. 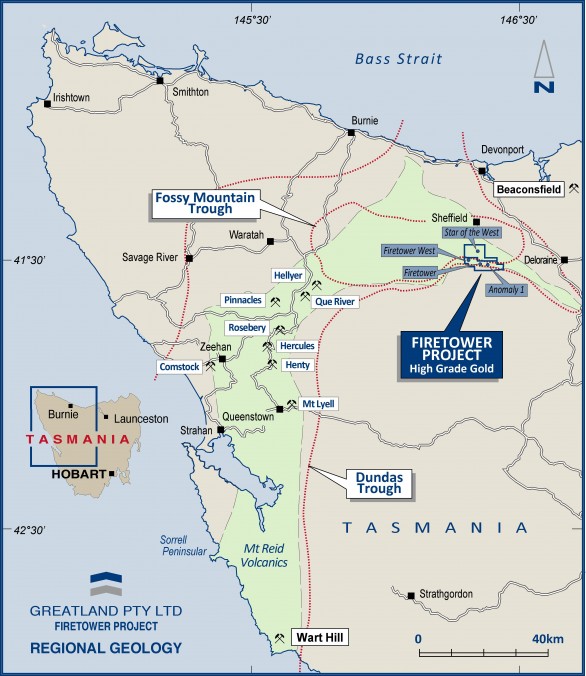 Gold mineralisation at Firetower was first located in the late 1970s with stream sediment samples up to 320g/t gold (+10 oz) but this was not followed up until the early 1990s with reconnaissance drilling. More modern exploration by Greatland and JV partners has included soil geochemistry to 4,450ppb gold, diamond drilling and detailed ground magnetics.

A detailed review of the Firetower project was undertaken including all historic and Company geophysics and drill data with reinterpretation and 3D modelling undertaken. This highlighted the presence of untested surface gold mineralisation immediately west of the main Firetower prospect with soil geochemistry results including 390ppb gold and 210ppb gold, and rock chip results up to 3.57g/t gold. This area has been overlooked in the past as scree cover largely masks bedrock geology. Early ground geophysics provides incomplete coverage over the Firetower prospect but shows an Induced Polarisation (IP) chargeability anomaly consistent with gold mineralisation intersected in existing drill holes. Extension of the IP coverage with modern geophysical equipment and processing techniques is considered a powerful tool to assist in significantly extending the strike potential of the gold mineralised system at Firetower.

Drilling and 3DIP has  tested only a small portion of the targeted 4km strike length area.

The zone of gold mineralization identified to date is open in all directions.

The Company’s exploration target for the Firetower prospect is 1 million ounces of gold.

Geophysics and early ground reconnaissance has identified over 40km of strike to the east and west of the drilled area with potential for gold and copper deposits. These are yet to be fully tested.

Firetower hosts Fossey Mountain Trough sedimentary and volcaniclastic rocks which are stratigraphically equivalent to the Mt. Read Volcanic sequence (MRVS). MRVS is a highly mineralised system and hosts world class base metal (VHMS) deposits such as:

Gold mineralisation is associated with widespread alteration of volcaniclastic rocks, within stockworks of fine quartz-carbonate veining & sulphide content, including chalcopyrite, of 2-5% with highs of 30%. Alteration is dominated by silica, carbonate and pyrite. 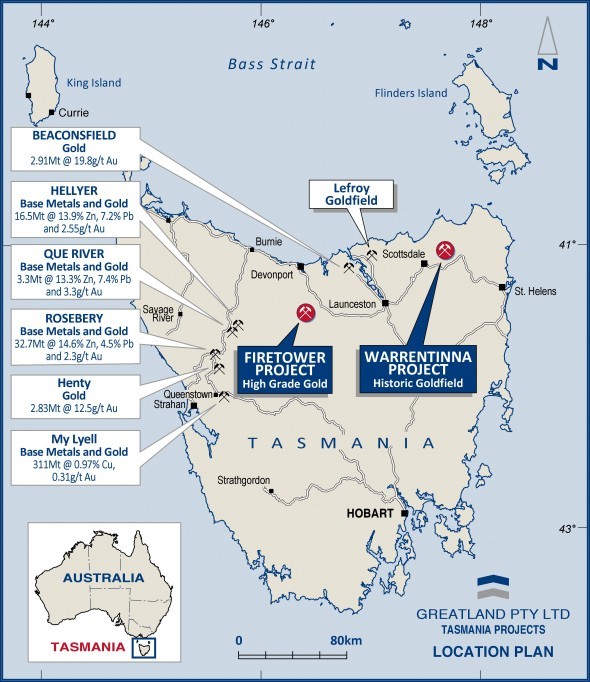 October 3, 2017 by glgoldadmin in Project Comments are off
© 2014 - 2016 Greatland Gold. All Rights Reserved.
This website uses cookies to improve your experience. We'll assume you're ok with this, but you can opt-out if you wish.Accept Read More