Located 25km north-east of Launceston in north-east Tasmania, the Lisle project covers 72sq km of host rocks which are equivalent to the goldfields in Victoria, south-eastern Australia.

The project is targeting the, as yet undiscovered, hard rock source of known local alluvial gold deposits.

It is only 45km from the Beaconsfield Mine, a 1.85M oz Au deposit and lies within the historic Lisle Goldfield with 250,000oz alluvial workings; the two largest goldfields in Tasmania.

Preliminary compilations and models of historic and new data suggest that a major source of lode and disseminated style mineralization occurs covered in thin scree. This near surface resource would be readily open pittable and thus potentially very profitable.

The Project is managed by Tamar Gold Ltd under the terms of a farm in agreement signed in 2013. 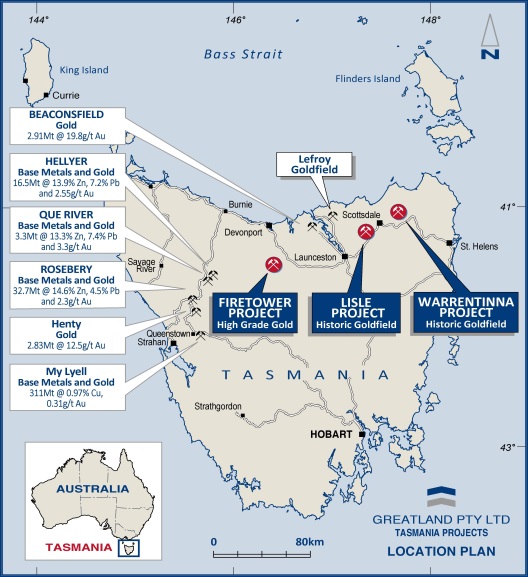 Historic gold reserves in the Lisle goldfield area were founded on alluvial deposits such as the Alberton, Mangana, Lefroy & Mathinna deposit with +250,000oz Au.

There seems to be a strong association between gold and the granitoid-sedimentary rock contact in the area, however no bedrock source for the gold has ever been found.

Preliminary compilations and models of historic and new data suggest that a major source of lode and disseminated style mineralization occurs covered in thin scree.

The Lisle area has been only patchily explored by various companies since the early 1970s with limited success. Almost no bedrock drill testing has been done.

Greatland Gold believes this near surface resource can be found with further systematic modern exploration techniques.

Work to date by the Company has consisted of geophysics interpretation and targeting, geological mapping, geochemical and biogeochemical sampling with RAB drilling.

Over 250 soil samples have been collected covering 4sq km of the tenement area. Results highlights of 268, 186 & 166ppb Au were reported and show a low level gold-in-soil anomaly, open in all directions. 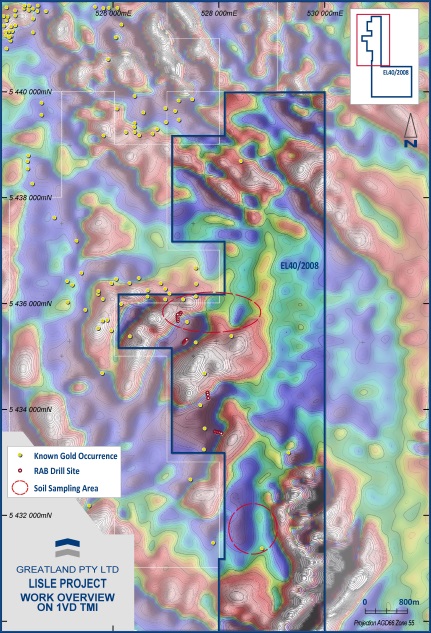 The Lisle project is sited on the western edge of the Scottsdale granite batholith which is intruded into the Mathinna Group rocks.

The Devonian granite intrusions occur with some contact metamorphism present. Gold is likely to have been emplaced during this intrusive period.

The Mathinna Group is equivalent to the Melbourne Trough geology which host the bulk of Victoria’s gold mineralisation (+50mill oz Au).

The project is subject to a Farm In / JV agreement dated 22 March 2013 whereby Tamar Gold Limited may earn 75% via expenditure of A$500,000 over a four year period.

March 28, 2014 by glgoldadmin in Uncategorized Comments are off
© 2014 - 2016 Greatland Gold. All Rights Reserved.
This website uses cookies to improve your experience. We'll assume you're ok with this, but you can opt-out if you wish.Accept Read More