The region is highly prospective for intrusion related gold-copper systems such as the Telfer deposit. Greatland has identified multiple targets across its licences and recent drilling has demonstrated the potential for one such target, Havieron, to represent a very large mineralised system.

The farm-in agreement includes Joint Venture and Tolling Principles which reflect the intention of both parties that, subject to a positive Feasibility Study outcome, ore from the proposed Havieron Joint Venture will be toll processed at Newcrest’s Telfer Gold Mine

Additionally, during the farm-in period, Newcrest will have a first right of refusal over the remainder of Greatland’s Paterson project (Black Hills, Paterson Range East and remaining areas of Havieron licence)

Laboratory assay results from drilling at Havieron include: 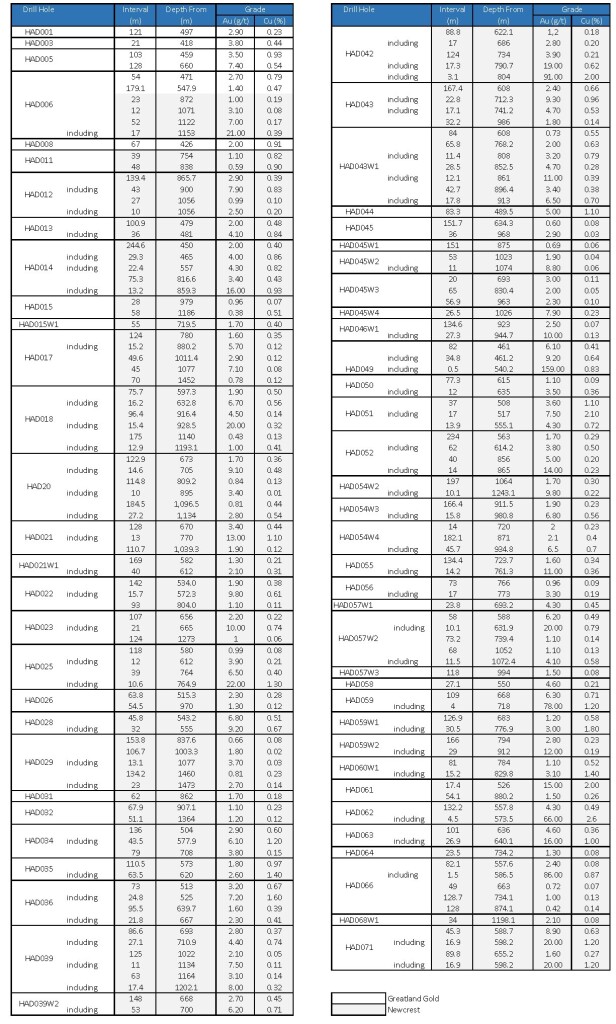 The Black Hills area is regarded as having high potential for hosting gold deposits similar in style to Newcrest’s Telfer Mine.

The Company will carry out field work over several prospects at Black Hills including surface geochemical sampling and geological mapping to determine the areas with the greatest potential for high-grade gold mineralisation. Results of this work will outline drill targets at the Black Hills project.

The Scallywag prospect lies approximately 6km west of the Havieron prospect within the Havieron licence, E45/4701, and is 100% owned by Greatland. Scallywag is a large, elongate magnetic anomaly with a strike length of more than 6km and is interpreted to be a structurally deformed sedimentary dome feature under approximately 50-100m of cover.

Results from the IP and ground gravity surveys show:

Historically, several targets within the tenements have been subject to initial first-pass work and show promise of hosting mineralisation as seen at Havieron. The geophysical signature of these targets is very similar to that at Havieron. The setting of these licences is on the western margin of a Proterozoic basin which ranges in depth from less than 100m below surface to more than 400m below surface. Basement rocks of the basin are predominantly calcareous rich sandstones intruded by several late stage granitic bodies exploiting basin margin faults which have also provided a focus for ore fluids.

Other discoveries in the region include Magnum (Au) and Calibre (Au), both owned by Antipa Minerals, O’Callaghans (Cu), Maroochydore (Cu) and the recent Winu gold discovery.

June 11, 2017 by glgoldadmin in Project Comments are off
© 2014 - 2016 Greatland Gold. All Rights Reserved.
This website uses cookies to improve your experience. We'll assume you're ok with this, but you can opt-out if you wish.Accept Read More